HOW PROPAGANDA works: THE NAZI MODEL 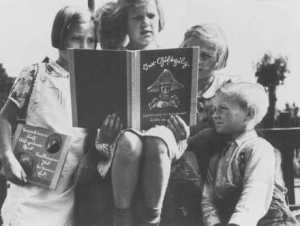 German children read an anti-Jewish propaganda book titled DER GIFTPILZ ( “The Poisonous Mushroom”). The girl on the left holds a companion volume, the translated title of which is “Trust No Fox.” Germany, ca. 1938.

“Propaganda tries to force a doctrine on the whole people… Propaganda works on the general public from the standpoint of an idea and makes them ripe for the victory of this idea.”  These are Adolf Hitler’s words in Mein Kampf (1926).

Following the Nazi seizure of power in 1933, Hitler established the Reich Ministry of Public Enlightenment and Propaganda headed by Joseph Goebbels. The Ministry’s aim was to ensure that the Nazi message was successfully communicated through art, music, theater, films, books, radio, educational materials, and the press.

There were several audiences for Nazi propaganda. Germans were reminded of the struggle against foreign enemies and Jewish subversion. During periods preceding legislation or executive measures against Jews, propaganda campaigns created an atmosphere tolerant of violence against Jews, particularly in 1935 (before the Nuremberg Race Laws of September) and in 1938 (prior to the barrage of antisemitic economic legislation following Kristallnacht). Propaganda also encouraged passivity and acceptance of the impending measures against Jews, as these appeared to depict the Nazi government as stepping in and “restoring order.”

Real and perceived discrimination against ethnic Germans in east European nations which had gained territory at Germany’s expense following World War I, such as Czechoslovakia and Poland, was the subject of Nazi propaganda. This propaganda sought to elicit political loyalty and so-called race consciousness among the ethnic German populations. It also sought to mislead foreign governments—including the European Great Powers—that Nazi Germany was making understandable and fair demands for concessions and annexations.

After the German invasion of the Soviet Union, Nazi propaganda stressed to both civilians at home and to soldiers, police officers, and non-German auxiliaries serving in occupied territory themes linking Soviet Communism to European Jewry, presenting Germany as the defender of “Western” culture against the “Judeo-Bolshevik threat, and painting an apocalyptic picture of what would happen if the Soviets won the war. This was particularly the case after the catastrophic German defeat at Stalingrad in February 1943. These themes may have been instrumental in inducing Nazi and non-Nazi Germans as well as local collaborators to fight on until the very end.

Films in particular played an important role in disseminating racial antisemitism, the superiority of German military power, and the intrinsic evil of the enemies as defined by Nazi ideology. Nazi films portrayed Jews as “subhuman” creatures infiltrating Aryan society. For example, The Eternal Jew (1940), directed by Fritz Hippler, portrayed Jews as wandering cultural parasites, consumed by sex and money. Some films, such as The Triumph of the Will (1935) by Leni Riefenstahl, glorified Hitler and the National Socialist movement. Two other Riefenstahl works, Festival of the Nations andFestival of Beauty (1938), depicted the 1936 Berlin Olympic Gamesand promoted national pride in the successes of the Nazi regime at the Olympics.

Newspapers in Germany, above all Der Stürmer (The Attacker), printed cartoons that used antisemitic caricatures to depict Jews. After the Germans began World War II with the invasion of Polandin September 1939, the Nazi regime employed propaganda to impress upon German civilians and soldiers that the Jews were not only subhuman, but also dangerous enemies of the German Reich. The regime aimed to elicit support, or at least acquiescence, for policies aimed at removing Jews permanently from areas of German settlement

During the implementation of the so-called Final Solution, the mass murder of European Jews, SS officials at killing centers compelled the victims of the Holocaust to maintain the deception necessary to deport the Jews from Germany and occupied Europe as smoothly as possible. Concentration camp and killing center officials compelled prisoners, many of whom would soon die in the gas chambers, to send postcards home stating that they were being treated well and living in good conditions. Here, the camp authorities used propaganda to cover up atrocities and mass murder.

In June 1944, the German Security Police permitted an International Red Cross team to inspect the Theresienstadt camp-ghetto, located in the Protectorate of Bohemia and Moravia (today: Czech Republic). The SS and police had established Theresienstadt in November 1941 as an instrument of propaganda for domestic consumption in the German Reich. The camp-ghetto was used as an explanation for Germans who were puzzled by the deportation of German and Austrian Jews who were elderly, disabled war veterans, or locally known artists and musicians “to the East” for “labor.” In preparation for the 1944 visit, the ghetto underwent a “beautification” program. In the wake of the inspection, SS officials in the Protectorate produced a film using ghetto residents as a demonstration of the benevolent treatment the Jewish “residents” of Theresienstadt supposedly enjoyed. When the film was completed, SS officials deported most of the “cast” to the Auschwitz-Birkenau killing center.

The Nazi regime used propaganda effectively to mobilize the German population to support its wars of conquest until the very end of the regime. Nazi propaganda was likewise essential to motivating those who implemented the mass murder of the European Jews and of other victims of the Nazi regime. It also served to secure the acquiescence of millions of others—as bystanders—to racially targeted persecution and mass murder.

This entry was posted in Uncategorized. Bookmark the permalink.