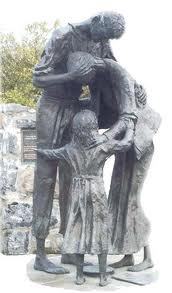 Between 1847 and 1851 over 30,000 people emigrated through the port of Sligo. On the Quayside, overlooking the Garavogue River, is a sculpted memorial to the emigrants. This is one of a suite of three sculptures commissioned by the Sligo Famine Commemoration Committee to honour the victims of the Great Famine. A plaque in the background, headed ‘Letter to America, January 2, 1850’ tells one family’s sad story:

“I am now, I may say, alone in the world. All my brothers and sisters are dead and children but yourself… We are all ejected out of Mr. Enright’s ground… The times was so bad and all Ireland in such a state of poverty that no person could pay rent. My only hope now rests with you, as I am without one shilling and as I said before I must either beg or go to the poorhouse… I remain your affectionate father, Owen Larkin. Be sure answer this by return of post.”

The reminders of that “day of visitation” are still to be seen here and there. The ruins of famine villages still stand on the windswept hills of the Ox Mountains, County Sligo, in mute testimony to a denuded population. The story of “The Great Hunger” (An Gorta Mór) which attended the failure of successive potato crops has often been told. It is –quite rightly- part of the History syllabus of the Irish educational system, much as it is mandatory for all Polish schoolchildren to visit Auschwitz. The past must be revisited, no matter how painful the journey, if its lessons are to be properly learnt.

The intention here is to emphasize the particular story of the Sligo area and to reflect on several letters and reports written during the first year of the crisis. Sligo is near where my family presently lives, and so that gave us the chance to talk to local people whose families have lived here for many generations and who carry family memories of those days. It was a local farmer, for example, (Kenneth Higgins of Skreen) who pointed out to me the ruins of that “famine village” on the Western face of the Ox Mountains near where he lives and works.

Sligo town itself was shielded from the worst depredations of the famine. It was in the surrounding countryside that the worst of hunger and disease was felt. The town had its Workhouse, true, but it had also the docks where the imported foodstuffs would enter the country and the food stores were also here by the dockside, (near where the modern Famine memorial now stands). The markets, major county businesses, banks and churches all had their power bases in Sligo town, so perhaps it is little wonder, reading the minutes of the Methodist Church from 1845 to 1851 that so little mention is made of the catastrophic events in surrounding areas

(Note: Thanks to Rev. Stephen Taylor, Sligo Methodist Church for this observation).

I’ll be developing this in future posts.