The Bitchiness of Historians (The Case of Herodotus) 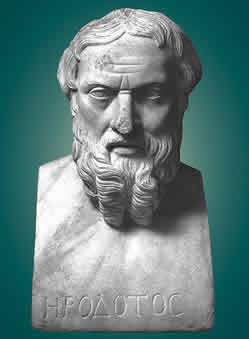 Historians have always been bitchy towards one another. It just seems to go with the territory. They are touchy, quick to take offence, or apt to chuck cold water, wet blankets and trenchant abuse on one another in ample doses. Of course, some do operate under that wise axiom: “Rubbish not, lest thou be rubbished” whilst others keep their heads so far beneath the parapet that they become lost in their own ruts forever, failing to notice the whine of crossfire.

Thus we get Terry Deary (of Horrible Histories fame) complaining that “all historians are seedy,” buttonholing Niall Ferguson for particular abuse, and Ferguson cheerfully cat-calling in return (in effect): “Well, at least I AM a historian.” Even Thucydides had a bitchy side, sniping at Hellanicus of Lesbos, that his Chronicle of Attica treated the events of the years 480-431 BC “briefly and superficially”, and “with little regard to chronological sequence.” Not much left for a historian to get right, is there? No detail and wrong dates. Rubbish.

So obviously, what you have to do is to go back to the dawn of history-writing, back to the pure source, when all was unsullied intellectual discovery.

Herodotus is often called “the father of history.” He is credited with inventing the whole genre of writing. Surely he didn’t have any one to complain about?

It seems pretty clear that Herodotus referred to other writers, such as Charon of Lampsacus, Dionysius of Miletus, Xanthus (who wrote a history of the kingdom of Lydia), and Hellanicus of Lesbos; (Burns 1972, pp24-5; Usher 1970, p3) but since they are only known through his work it’s difficult to see how he was treating them as sources. Did he plagiarize, condense, elaborate? It’s impossible to say. When we look at the work of Hecataeus we are on surer ground. It is possible that Herodotus developed his whole schema on the form of the geographical accounts and travel-logue style of Hecataeus, but Herodotus usually only specifically mentions the name of Hecataeus when he chooses to specifically rubbish him (Briggs 1985).

Herodotus (writing 445-425 BC ish) accepted that Hecataeus (c500 BC?) may have chivvied the Greek myths (which he described as “ridiculous”) into some sort of rational order. He respected him as a senior statesmen during the Ionian revolt to an extent (499-494 BC) but thoroughly trashes him as a historian (VI.137).
In fact –and do put me straight here- I’ve always suspected that Herodotus was having a sly dig at Hecataeus in II, 143, where he tells a rather interminable anecdote about a visit to an Egyptian temple at Thebes. It recounts how the priests showed Herodotus a series of statues in the temple’s inner sanctum, each one supposedly set up by the high priest of each generation. Hecataeus, says Herodotus, had seen the same spectacle, after mentioning that he traced his descent, through sixteen generations, from a god. The Egyptians compared his genealogy to their own, as recorded by the statues; since the generations of their high priests had numbered three hundred and forty-five, all entirely mortal, they refused to believe Hecataeus’s own claim of descent from a mythological figure. Rather than showing the scepticism of Hecataeus –as scholars often claim- don’t you think the story shows something of the bitchiness of Herodotus, sniping at a perceived arrogance?
But Herodotus didn’t escape a trashing by posterity by any means. Rather than being dubbed “father of history” he has sometimes been called “father of lies.” Plutarch, the biographer of the 1st century AD wrote an essay On the Malice of Herodotus, which strongly criticized him. A.R. Burns reminds us that Plutarch was a Boeotian, i.e. he came from the region of Thebes, and Herodotus had castigated Thebes in his account because they had gone over to the Persian side during the war (1972, p15). Bit of an agenda there perhaps? Like De Gaulle’s attitude towards Vichy France? Here’s the bit in question:

The style, O Alexander, of Herodotus, as being simple, free, and easily suiting itself to its subject, has deceived many; but more, a persuasion of his dispositions being equally sincere. For it is not only (as Plato says) an extreme injustice, to make a show of being just when one is not so; but it is also the highest malignity, to pretend to simplicity and mildness and be in the meantime really most malicious. Now since he principally exerts his malice against the Boeotians and Corinthians, though without sparing any other, I think myself obliged to defend our ancestors and the truth against this part of his writings, since those who would detect all his other lies and fictions would have need of many books. (Plutarch The Malice of Herodotus I)

So while we’re at this point, it’s worth asking: Was Plutarch’s criticism justified, apart from the Boeotian agenda? Did his bitchiness have a rationale? Was Herodotus any good?

Well, for a start, when Herodotus did not actually travel to a foreign country that he discussed, we might ask how he got his information. He certainly doesn’t know any language other than Greek in any depth – his few attempts in giving foreign derivations of names are disastrous! Even the local languages of Asia Minor were completely unknown to him: I think it likely that Herodotus could not read or speak any language other than Greek. Famously he asserts that all Persian names end in the letter sigma, so revealing that he knew all his Persian through its Greek forms (1.139) – and also ignoring his own evidence of the names of Persian women such as Atossa or Phaedyme…

I guess we better return to this discussion (fast becoming a diatribe) and talk in another post about how brilliant Herodotus was. Here, suffice to say that if you want to find someone’s shortcomings, you don’t have to dig too deep.

And the best historians are –after all –professional diggers.