Was Ludwig Erhard the real mover and shaker in the Adenauer years? 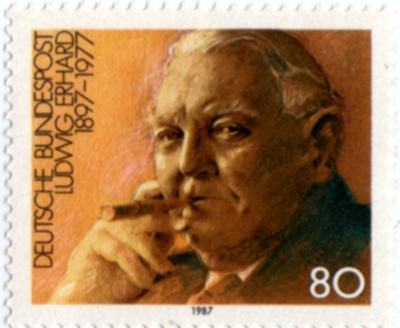 As economics minister during the Adenauer years (1949 – 63), Erhard was the chief architect of West Germany’s postwar economic recovery. He achieved what has been called an economic miracle through his “social market system,” which was based on free-market capitalism but included special provisions for housing, farming, and social programs. In 1957 he was appointed federal vice-chancellor, and in 1963 he succeeded Konrad Adenauer as chancellor. His government was troubled by an economic downturn and a budget deficit, as well as Erhard’s relative weakness as a leader, and he was forced to resign in 1966.

Perhaps no other figure is more closely associated with West Germany’s post-war economic recovery than Erhard. He returned from the First World War badly wounded and decided to study economics and sociology, achieving his doctorate in 1925. From 1928 to 1942 he worked in market research in Nuremberg, after which he founded his own institute with money from private industry. Intellectually he was thinking about the possible consequences of Germany’s coming defeat. From 1945 on he was encouraged by the Americans, working first as Economics Minister in Bavaria, and then in Frankfurt am Main on the currency reform. However Erhard was kept in the dark about the date and conditions of the new mark’s introduction (1948). He thought of resigning but was allowed to announce its coming on the radio. With it came the market economy which swept away many of the wartime controls still in place. Prices were high but the shop windows were full again. Long hours of work brought rewards. The German miracle was greatly helped by the outbreak of the Korean War in 1950 which gave West Germany its chance in world markets. The well-trained labour force was ready to be deployed. High unemployment helped to keep wages low.

Erhard was never really a party man and would have been at home in the Liberal FDP but Adenauer persuaded him to join his CDU. As noted, he served as Minister of Economics from 1949 to 1963. By the mid-1950s the German economy had recovered far more rapidly than anyone had foreseen, and Adenauer and Erhard were popular — but not with each other! The public saw Erhard as the “crown prince” and felt he should succeed Adenauer. By 1959 Adenauer was 83 but was only willing to give up as Chancellor if he could be President and Erhard (at 62) was somewhat restless. The two had other differences. Adenauer was far more political and was looking for a united, Catholic Western Europe whereas Erhard was more pragmatic. Adenauer had his power house in the party, Erhard did not. The losses at the election of 1961 decided the issue of Adenauer’s departure in 1963. Erhard seemed to be the man who could steer the CDU/CSU back to popularity. In the election of 1965 he led his forces to an unexpectedly good result against Brandt’s SPD.