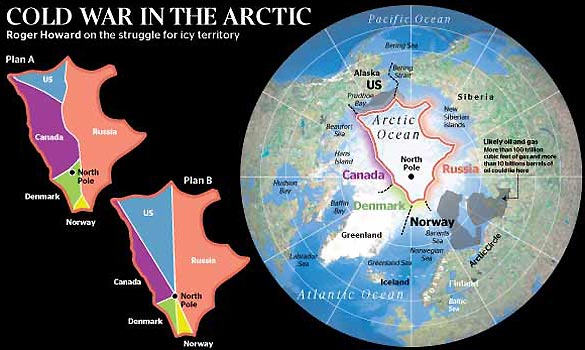 Considering the territorial factors in the Cold War, does this week’s news about melting ice caps suggest the possibility of an imminent “ice cold war”? Roger Howard explains:

The drastic climatic changes in the Arctic, viewed first-hand this week by an ‘alarmed’ UN Secretary General Ban Ki-Moon, are threatening to unleash not only environmental catastrophe on the rest of the world but a furious political struggle between competing regional governments.
The Arctic Five – the US, Russia, Norway, Canada and Denmark (Greenland) – are scrambling to secure territorial rights to disputed and hitherto unclaimed parts of the world’s last great wilderness. This is partly because the retreat of local sea ice is opening up to exploitation what many leading experts think could be massive reserves of petroleum- even as much as 13% of the world’s undiscovered oil and 30% of its undiscovered natural gas.
Exploiting many of these reserves would not currently be commercially viable: Russia’s Shtokman gas complex and Norway’s Goliath oil field, both in the Barents Sea, have proved to be extremely expensive to develop, and stand at the very verge of what is technically achievable. But the ‘Arctic Five’ know that, over the coming decades, new engineering techniques could conceivably realise what can currently only be dreamt of, just as today’s deep sea ventures in the North Sea and elsewhere would once have been scoffed at.
With ice levels – now at their annual minimum – covering a much smaller area than 30 years ago, such talk no longer looks quite so unrealistic. They reached a record low in September 2007, when the entire Northwest Passage was open water, and there is even speculation of an ‘ice-free’ Arctic Ocean by 2030.
Natural resources aside, neighbouring countries are also deeply aware that an ice-free Arctic Ocean would have all sorts of important, even alarming, strategic repercussions. Russia, long deeply conscious of its national security, is now confronted by the prospect of a new ‘fourth’ frontline- a hostile power launching a naval attack over the North Pole against its naval bases, and key oil and gas fields, situated along its northern coasts.
This is equally true of the United States, which would also have to contend with foreign ships- perhaps warships belonging a hostile power- sailing off Alaska, close to its own oilfields at Prudhoe Bay and vital radar installations along the coast. Greenland and Iceland will also have huge strategic importance because they control vital trans-Atlantic shipping lanes.
These two issues- natural resources and strategy- are now set to inflame the issue that underwrites the growing political controversy: the question of ‘who rules’.
Until recently, much of the Arctic Ocean had received scant attention from neighbouring countries for the simple reason that it was too hostile an environment to merit any. But now the five Arctic powers are staking their claim to the areas of ‘No Man’s Sea’ that surrounds the North Pole. Legally, however, there are different ways of doing this but no real ‘right way’. Historically, international lawyers have favoured drawing straight lines to a particular central point- like the North Pole- and dividing a disputed area like ‘slicing a pie’. This favours the US and Norway but others prefer the drawing a ‘median’ or ‘equidistant’ line around the nearest point of their coastline: Canada and Denmark want to use this approach to claim an ‘outer continental shelf’ that extends for up to 350 miles off their coasts.
Further south, there are several other disputed areas, many energy-rich. Russia and Norway both claim parts of the Barents Sea, Canada and Denmark contest Hans Island, off Greenland, and Canada and the US squabble over an important slice of the Beaufort Sea. These are likely to be amicably resolved, but international tension involving Russia could easily spill over into outright confrontation.

Roger Howard is the author of The Arctic Gold Rush: The New Race for Tomorrow’s Resources, published by Continuum