The Origin and Development of the Cold War 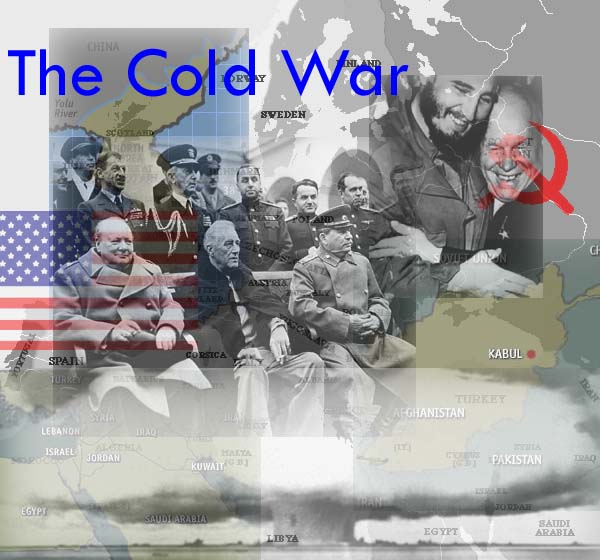 The total mark for this paper is 60.

The marks for the various parts of questions are shown in round brackets: e.g. (20).

Study Sources 1–6 below and answer Question 7, parts (a) and (b) which follow.
SOURCE 1
(From a speech by Vyshinsky, deputy Foreign Minister and Soviet spokesperson at the United Nations on 18 September 1947, criticising the Marshall Plan)

As the experience of the past few months has shown, the proclamation of this doctrine meant that the United States Government has moved toward a direct renunciation of the principles of international collaboration and concerted action by the great Powers and towards attempts to impose its will on other independent states, while at the same time obviously using the economic resources distributed as relief to individual needy nations as an instrument of political pressure. This is clearly proved by the measures taken by the United States Government with regard to Greece and Turkey which ignore and bypass the United Nations as well as by the measures proposed under the so-called Marshall Plan in Europe.

SOURCE 2
(From Khrushchev Remembers, published in 1970)

Stalin had pinned his hopes for communist expansion on to an economic collapse of Western Europe. He was convinced that, after the war, Germany would stage a revolution and follow the path of creating a proletarian state. Stalin wasn’t the only one who incorrectly predicted this. All of us thought it would happen, because we wanted it so much. After the catastrophe of World War Two, we hoped Europe too might become Soviet. Everyone would take the path from capitalism to socialism. However, after Potsdam, events did not develop in our favour. The powerful economy of the United States prevented the devastated economies of the European countries from reaching the point of a revolutionary explosion. Things did not happen the way we wanted and predicted. Unfortunately all these countries stayed capitalist, and we were disappointed.

The events in Hungary in 1956 showed the vulnerability of the Soviet sphere of influence, which had been built up after the Second World War. The calls for liberalisation within Hungary were encouraged by Khrushchev’s policy of destalinisation and demonstrated the impact that changes within the Soviet Union could have on its satellite states. The actions of the USSR in Hungary in 1956 indicated that there were limits to the independence of the eastern bloc countries. The Soviet response to calls for reform was to invade Hungary and restore a government of its own liking. These actions showed a willingness on the part of the USSR to maintain a tight hold over its sphere of influence in Eastern Europe. The Warsaw Pact, which had been created the previous year, helped Soviet dominance and the organisation ensured other eastern bloc countries contributed to the Soviet straitjacket over the region. The reaction of the West was important in establishing some of the rules of the Cold War. The USA led protests against Soviet actions in Hungary. Yet, other than issue statements of condemnation, the West did little to intervene in a crisis that was seen to be within the Soviet sphere of influence.

SOURCE 4
(From M. Leffler and D. Painter, The Origins of the Cold War: An International History,
published in 1995)

The European countries found themselves dependent on the US economy in a way they never had been before. This left them susceptible to small fluctuations in the US economy. In 1945 the UN calculated that a 4% fall in employment in the United States would cost the world $10 billion in dollar earnings. These international consequences of the Second World War were only dimly perceived in the US before the end of the war. Although the strategic brilliance of the Marshall Plan was that it responded to the breakdown of the old economic order in Europe, the original impetus and rationale for it came from the United States, not from Europe. The case for large-scale grant assistance was made long before the particular consequences of the war were known and also long before the beginnings of the Cold War. It was made in terms of a theory of the Second World War’s causes and of perceptions of the US economy’s structural needs.

SOURCE 5
(From Truman’s presidential campaign speech at the University of California, 12 June 1948)

The refusal of the Soviet Union to work with its wartime allies for world recovery and world peace was the most bitter disappointment of our time. Different economic systems could live side by side in peace, but only providing one side is not bent on destroying the other. Our policy towards Europe will continue to be a policy of recovery, reconstruction, prosperity – and peace with freedom and justice. In its furtherance, we will gladly join with all those of like purpose. The only expansion we are interested in is the expansion of human freedom and the wider enjoyment of the good things of the earth in all countries.

With hindsight it would seem that Khrushchev concluded from careful reading of Kennedy’s speeches and perhaps KGB informants, that the United States really would go nuclear to defend West Berlin; Kennedy had indeed directed military reaction only if ‘our presence in’ or ‘our access’ to West Berlin were threatened. The DDR had long been pressing for the control of movement between East and West Berlin, and Khrushchev suddenly had his ambassador tell Ulbricht to work out ways of effecting this. Khrushchev is reported as having authorised Ulbricht to erect barriers within Berlin at the sectoral border, ‘but not one millimetre further’. In the early hours of Sunday August 13 the East Germans suddenly strung barbed wire along the border, catching the West completely by surprise. West Berlin politicians felt let down by the sluggish and low-key Western response. The barbed wire progressively hardened into a Wall, the concrete embodiment of the division of Europe, guarded by troops who shot would-be escapers.

(b) Use Sources 2, 3, 4, 5 and 6 and your own knowledge.
How far do you agree with the view that it was primarily the existence of contrasting economic systems that prevented the relaxation of super-power tensions in the period 1945–62? Explain your answer using the evidence of these five sources and your own knowledge.(40)

This entry was posted in A Level History, American History. Bookmark the permalink.

1 Response to The Origin and Development of the Cold War